A Brief History of the Band The Town of Cobourg has had a long tradition of military bands dating back to the 19th century.  The origin of its present band can be traced back to 1842 when the Cobourg Brass Band made its debut.   It became associated with the military in 1862 and also became known as The Band of the 6th Northumberland Militia.  In the late 1800’s, when it added woodwinds, it became known solely as the Cobourg Citizens Band.  In 1898, the band was taken over by the military and renamed the 40th Battalion Artillery Band.  However, in 1905 the name The Cobourg Citizens Band was re-instituted.  In 1920, as a result of a leadership disagreement, an offshoot band was formed, The Cobourg Concert Band.  A year later the disagreement was resolved and the two bands reunited under the name The Concert Band of Cobourg (Kilties), adopting the highland dress for its uniform.  The Cobourg Concert Band (Kilties), eventually better known as the Cobourg Kiltie Band, was an important cultural part of Cobourg’s heritage for many years, yet by the late 1960’s interest waned and the band became inactive.

In 1970 the band was revived with the appointment of Mr. Roland G. White as the Director of Music.  Drawing on his extensive experience with The Royal Marines Band Service in Britain, Mr. White set a new direction for the band. Under his leadership the name was changed to The Concert Band of Cobourg and he began moulding the band in the style of Royal Marines bands.  The kilted form of dress was abandoned with the uniform eventually evolving into that seen today.  In 1975, the band accepted the invitation to represent the Royal Marines Association of Ontario and donned the distinctive white pith helmets for parades and tattoos.  With the approval of the Town of Cobourg and the Royal Marines School of Music in the U.K., the band was honoured to add the distinction of The Band of Her Majesty’s Royal Marines Association, Ontario to its name.  Mr. White retired in 2000 with the title Director of Music Emeritus, after 30 years of dedicated service.

As a result of Mr. White’s efforts, and the ensuing leadership of Mr. Paul Storms, The Concert Band of Cobourg is one of the most sought after bands for parades and military tattoos throughout Ontario and beyond.  The band also has a fine reputation in the formal concert setting, playing in many locales including its own Summer Concert Series every Tuesday evening in the months of July and August at the bandshell of Cobourg’s Victoria Park. 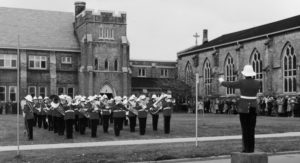 Based on information provided by Band Historian: Bob Irvine